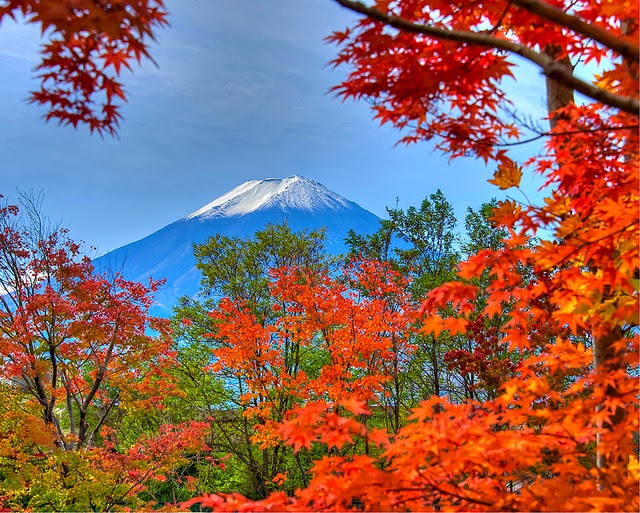 inserting a random picture of Mt.Fuji with fall leaves since it's autumn.

So it's been almost 3 months since I last blogged? I didn't mean to disappear for so long but I was having issues renewing my domain and I couldn't even log into my google account to renew it. As a result, my domain ended up expiring and I wasn't able to renew it and it reverted back to my original blog address on blogger which resulted me in losing a huge amount of visitors from visiting my website which I was so stressed over about. Then I got too busy with my Japan trip planning to bother to care anymore so I just stopped caring. But now that I'm back from Japan, I want to blog and post about the wonderful and amazing things I did there while I try to get a new domain and get it hosted on my blogger.

Anyway enough ramble about that, I wanted to blog about some things I've noticed while I was in Tokyo before I forget. Some things I found extremely surprising because it was not what I had expected/imagine Japan to be.

1. I found it EXTREMELY hard to locate a garbage can on the street and even inside malls in Tokyo. It was like garbage cans don't even exist there! The thing is, I realized nobody ever eat or drink while they are on the street and it made feel so extremely awkward and weird to be eating and drinking while I was on the street. And trust me, you will regret doing so because locating a garbage to throw away your trash was such a difficult task to do. And you will never see anyone eat while they're on the train. I've seen a few people drink on the train but never eating. So eventually I learned things the hard way which was to always eat my food and finish my drinks before I leave my hotel so I can throw it in the garbage can in my hotel room. I don't know why but is it just within Japanese culture that people don't drink and eat while they're on the street?

2. You are not allowed to eat and drink at almost all the malls there, other than when you are eating in a food court at the mall of course. But otherwise you are not allowed to or you shouldn't be eating or drinking while you're walking from stores to stores inside a mall. I was feeling sooo thirsty one time when I was shopping in Daiso and I had a bottle of water in my bag so I took it out to drink and got told off by this security guard officer at the shop that I was not allowed to drink inside the store, not even drinking water! And then I noticed the signs at the store with "no picture or food allowed" Like they were just so hardcore strict on that it was kind of starting to get a bit of an annoyance. In Canada, nobody cares if you eat or drink while you shop inside a mall walking into a store but it seems like eating and drinking at a mall is a big taboo in Tokyo. And not to mention the streets there are like super clean that you never find garbage or litter anywhere you go.

3. They don't have hand dryers or even paper towels to dry your hands in most public washrooms. I kind of knew this beforehand from reading blogs and watching videos on youtube so I brought a handkerchief with me to wipe and dry my hands. But if you've never been to Japan before, you might find this rather surprising and shocking. So be prepared and bring or make sure you have tissues with you otherwise you will have to air dry your hands! lol.

4. Women in Tokyo are surprisingly TALL! I mean they are all taller than me and I'm like 5'4 without heels and around 5'7-5'8 with heels on. You'd always hear stories about how short and tiny Japanese girls are but let me tell you, I hardly saw any short Japanese girls/women while I was in Japan. They're all pretty much average height to women in Canada or U.S.A. If I must say, I think we have much more shorter girls/women existing in Canada than in Tokyo.

5. Women there surely don't expose any skin at all. A lot of times I'd see Japanese women in Tokyo wearing skirts or shorts but they'd all wear nude tights underneath, hardly ever showing their bare skin. I was pretty impressed and amazed by this fact. It also kind of made me feel a little insecure about how much skin exposure I should be exposing there to not stir too much attention or stand out from the rest of people in Tokyo.

6. Apparently Japan doesn't carry clothing size smaller than a medium. When I was shopping there, I found it extremely shocking that most Japanese stores (especially Japanese brand clothing stores) don't carry clothes in a size smaller than a medium. A lot of times the store staff would tell me the clothes only come in two sizes, medium or large. Ehhhhh?! I was so shocked! =O I had a lot of trouble shopping because of this. And the medium size can vary depending on the store you shop at. Sometimes a medium size can be equivalent to a small in Canadian/American size and sometimes it's much bigger. I was sooo shocked because most Japanese girls are usually very skinny/petite in body size that I would expect them to make clothes that are much smaller and form fitting? But to my surprise a lot of the clothes they sell seem to be more loose fitting and the only stores I could find clothes in a size smaller than a medium was at Forever 21 and H&M. I didn't even end up buying any clothing there other than two trench coats. And to be honest the fashion they were selling was a lot different than what I have expected it to be. They were also soooo ahead in season that they were selling thick winter clothes in early October! I was still in fall mode that I was hoping to shop for some thin layers but they were like nowhere to be found! o_o

7. The 109 mall in Shibuya was surprisingly quite a disappointment for me. Before going there, I'd hear and see amazing things through youtube about the mall and how everything there is just sooo kawaii and heavenly amazing! That was not what it was when I went there and I was literally done shopping the entire mall in 2 hours. I didn't even buy a single thing from the mall!! I don't know if it has to do with the season when you go there or what but the mall just wasn't "amazing" to me. And to be quite honest, I found the mall to be quite cheap and cluttered. I also find the clothing quality there isn't as great either. Or maybe the mall is more garnered towards a "gyaru" style and I'm not really too into the whole gyaru fashion. I enjoyed shopping at the more American style malls such as Marui One, Lumine EST in Shinjuku, Divercity at Odaiba and Parco and P'Parco in Ikebukuro. I gotta go back and shop at those malls when I go to Tokyo again.

8. Squatting toilets actually exist in Tokyo. Okay, so I knew they do exist in Japan but I wasn't expecting to see them in Tokyo because it is such a big city but no they do exist! I was more of expecting to see them in the countryside prefectures in Japan. I had to use a squatting toilet twice when I was using them at a train station. This reminds me of my China trip all over again, lol. For those of you who don't know what a squatting toilet is, here is a picture for your reference. If you have never visited Asia before, specifically China, then you might not understand/know what the whole squatting toilet situation is about. Oh let me warn you to do prepare that it is not the most comfortable experience you'll ever encounter! XD But I have to say the places where they had the most clean toilets is at the airport in Japan. They're sooo spacious too that you can even carry your suitcase in with you! XD

9. Transportation could be quite affordable in Tokyo especially if you take the JR lines. Usually tickets could range about 100-500 yen one way depending on which station you're traveling from and to. I like to group everything I want to do in one day in one specific area so I can minimize the cost of transportation spent in one day. Sometimes I would only spend about 400-500 yen a day on tickets.

10. Food is also very cheap. You can buy yummy good konbini food for lunch/dinner at the convenience store for less than 500 yen. If you go to the grocery store after 8pm, you can usually find things for half price too. I ate combini food for dinner almost everyday there which saved me a lot of money on food. I only eat out for lunch and trying random snack food here and there when I was hungry, lol.

Overall my first Tokyo trip was amazing! I can't wait to go back again in April 2016 for sakura blooming season. =D
Posted by sweet_honeydew at 1:40 PM