Going to a maid cafe was one of the things on my to do list in Tokyo and there is no other place to go to for that than Akihabara! There are so many different maid cafes in Akihabara that you would often see maids on the street handing out flyers to attract customers to come to their cafe due to the high competition of other maid cafes in the area. Before going to Tokyo, I did some research on which maid cafes were the most popular ones to go to in Akihabara and came across the maidreamin cafe which is actually the No.1 cafe in Akihabara. There are actually 15 locations in Japan and even one in Thailand! And there is 7 different branches in Akihabara alone. I went to the one that is closest to Akihabara station. It is literally about a 2 minute walk from the station from the electric town exit. 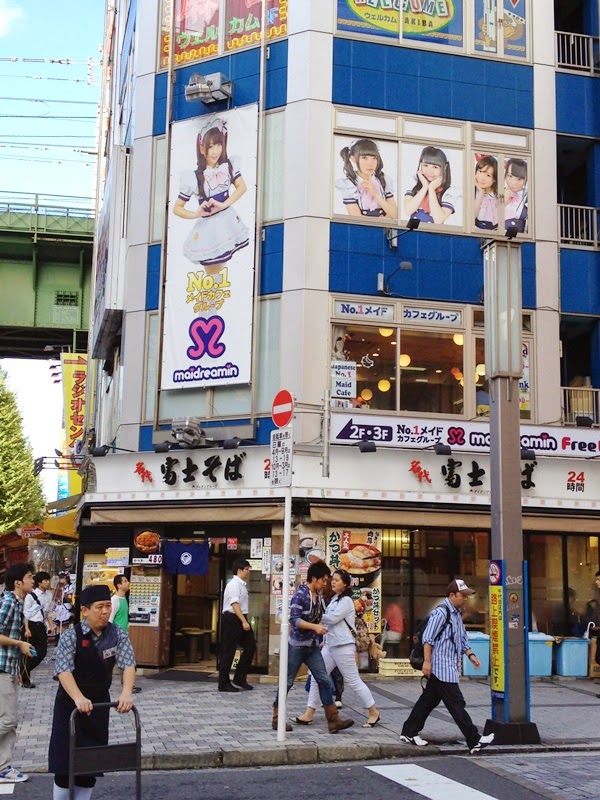 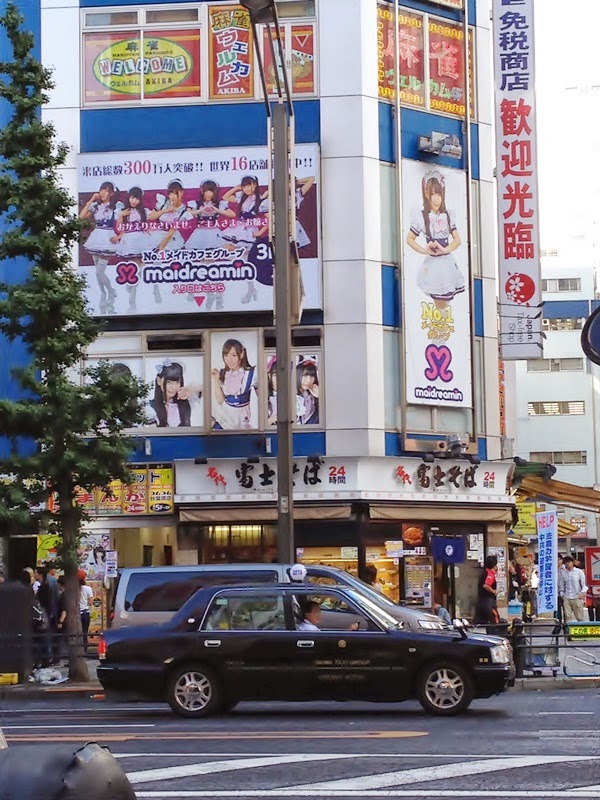 The outside of the cafe when you walk out from the electric town exit from Akihabara. You can spot their ads so easily that it would not be hard to find the cafe and plus there is always a maid in front of the cafe handing out flyers. She was soooo happy when I approached her to get a flyer and she walked me to the elevator to go upstairs to the cafe on the 3rd floor. 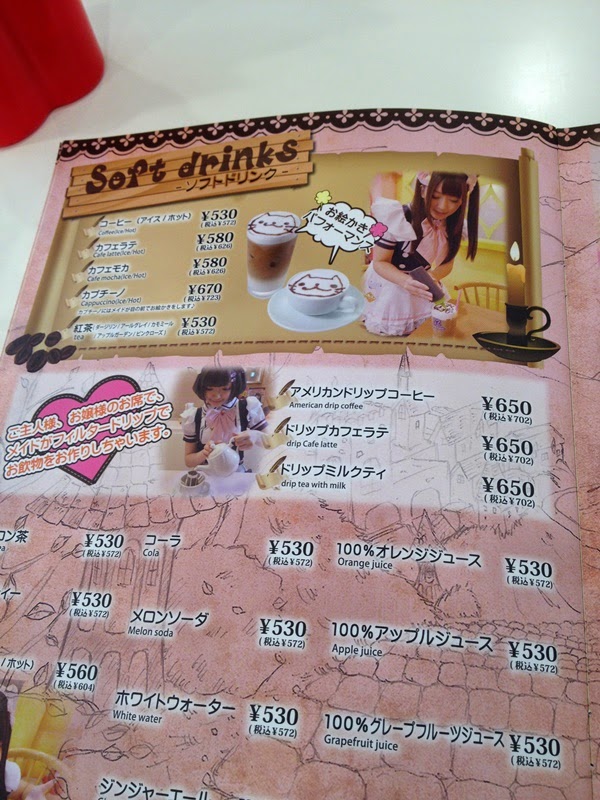 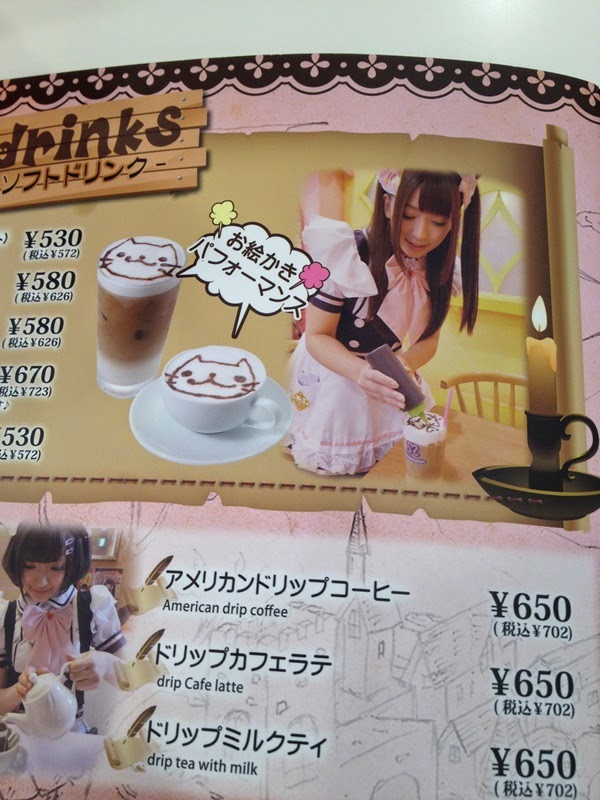 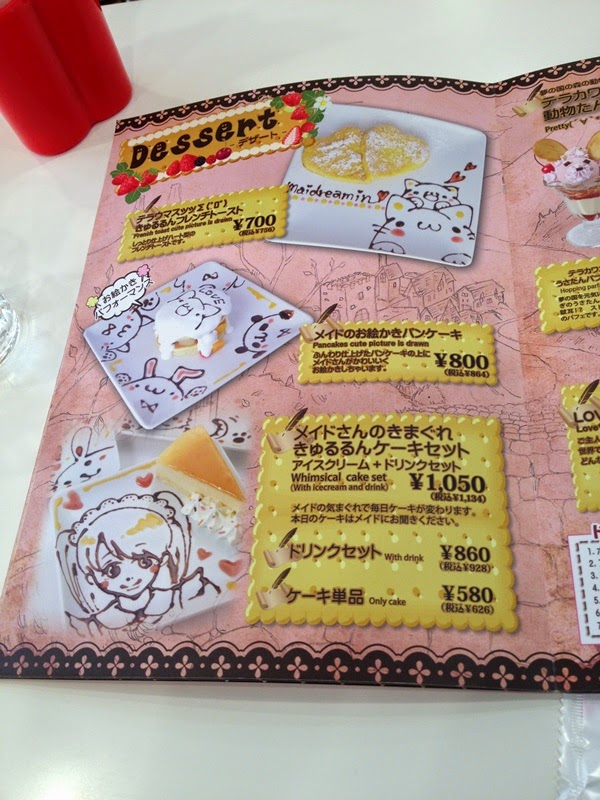 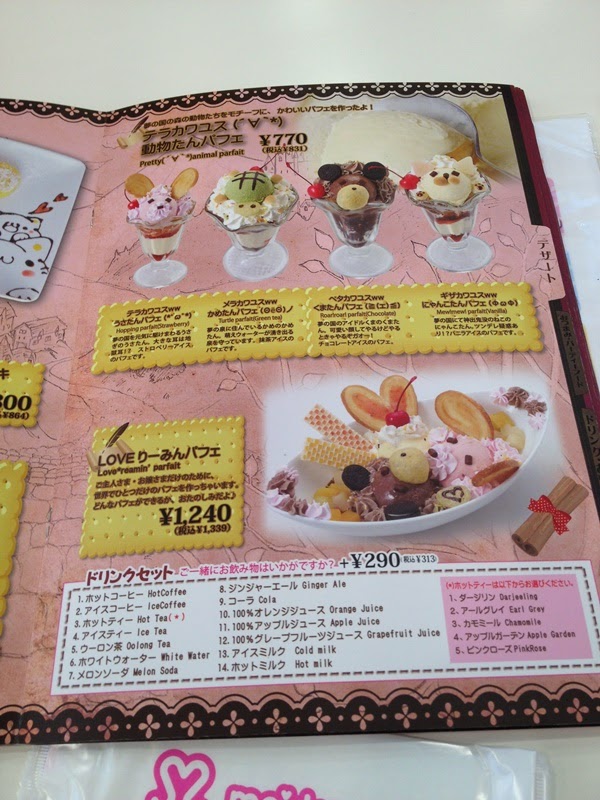 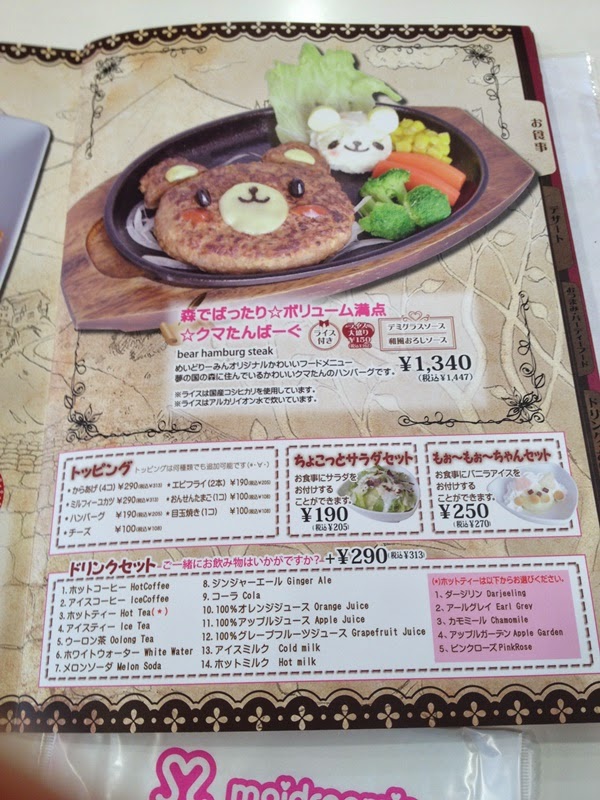 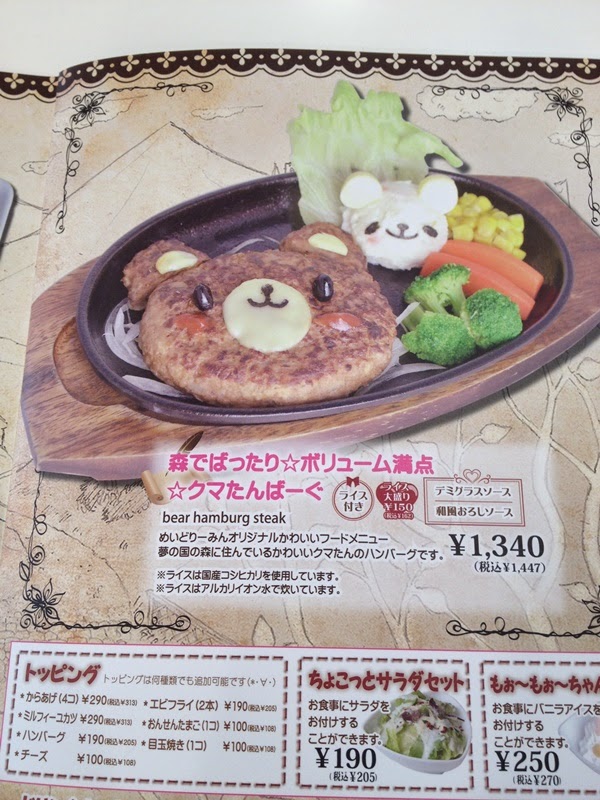 Their menu set. Everything looks so KAWAII that I just want to eat EVERYTHING!!! Just take all my money, lol. After I was greeted and got a table to sit down at, the maid explained to me about the different promos and combo sets that I can order. There was a minimum order of at least one order of anything like dessert if you are not too hungry or you can just get a drink. She also told me about the special set menu where you get a drink and a meal + a photo with a maid but I didn't go with that option because I wanted to eat ice cream and the special set menu did not come with ice cream, lol. So in the end I ordered a bear hamburg steak meal and a strawberry animal parfait with a cafe mocha drink because it was the first official day I went out after I landed in Japan and I was sooooo jet lagged that I needed to drink some coffee to keep me awake so I can go on a crazy shopping spree. XD 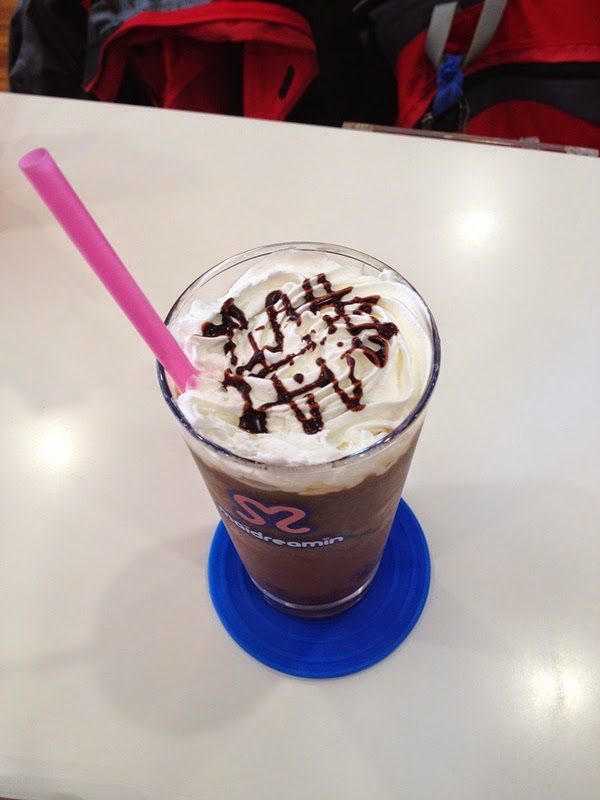 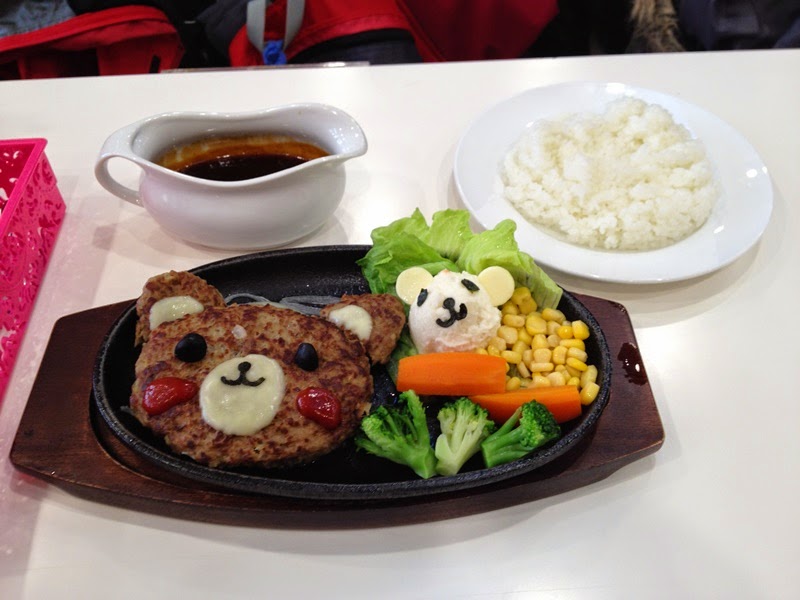 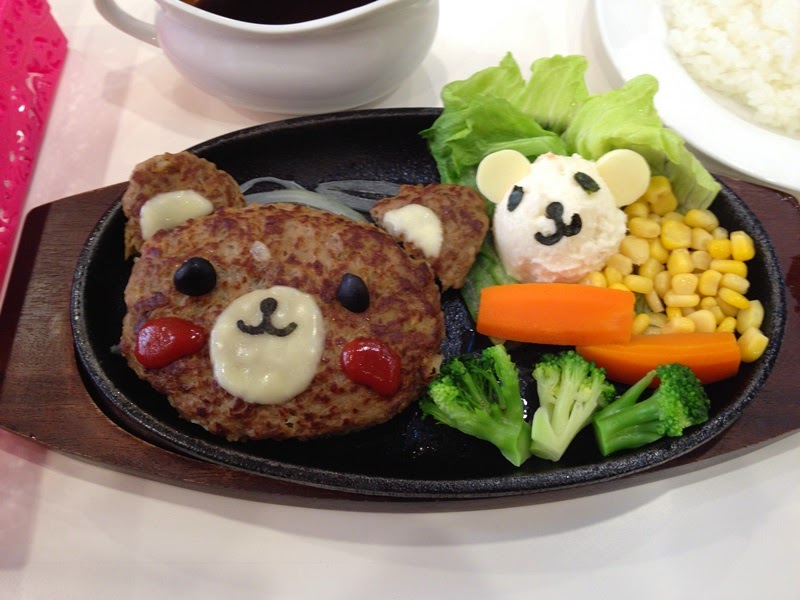 Is this not the cutest meal? So cute I almost didn't want to eat it! lol. 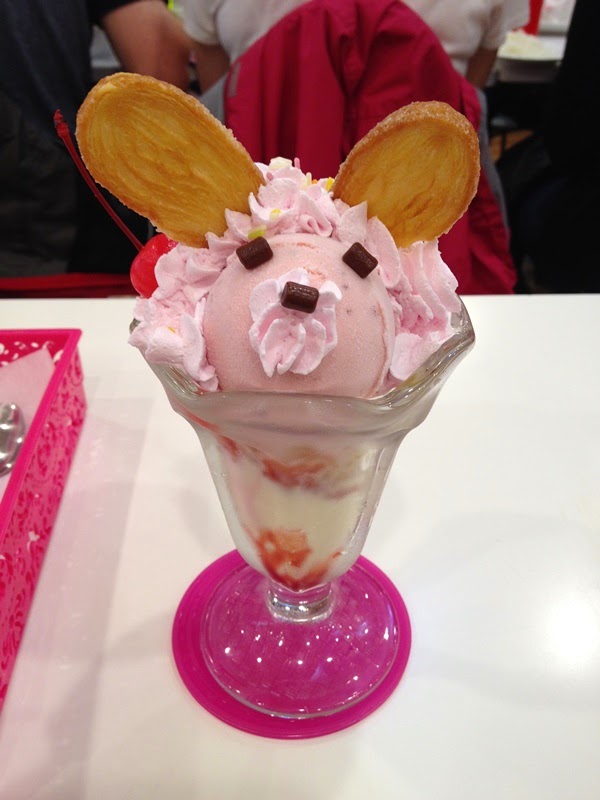 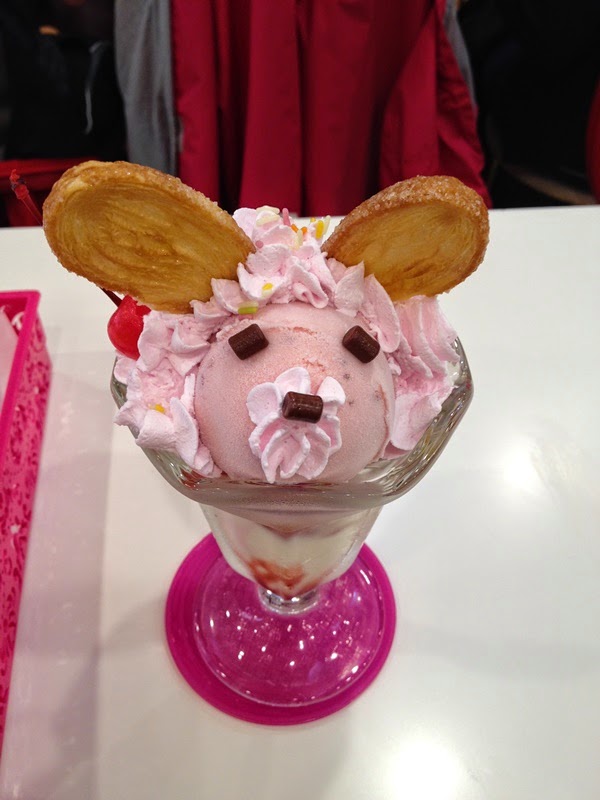 And my strawberry animal parfait which looked like a bunny and actually tasted pretty yummy! ♥ 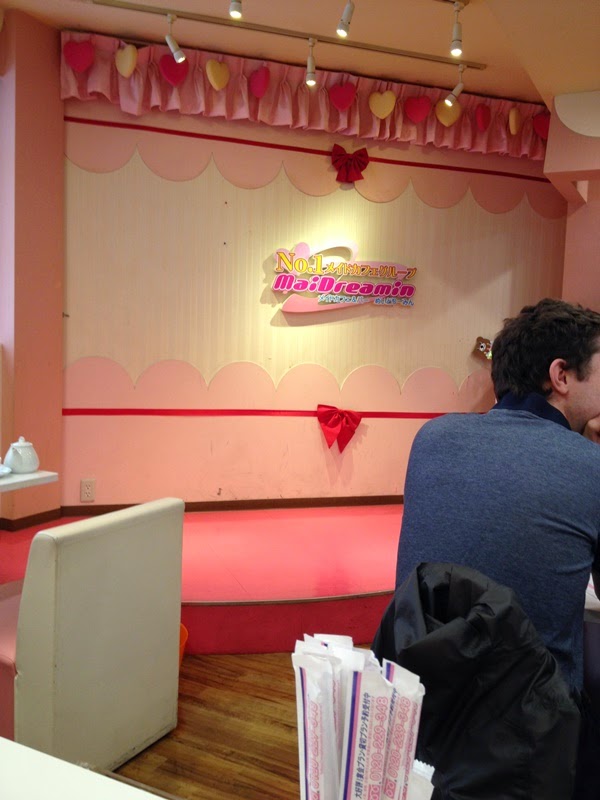 This was one part of the cafe with the stage in which the maids do stage performance and sing. One maid was actually singing on the stage and playing games with the guests at the cafe. They even gave each of us a free glow stick to play with while she was singing and there was even a draw for free prizes in which I won a free maid clear file folder. You are not allowed to take pictures of the inside of a maid cafe but taking pictures of the food is okay. I actually sneakily took this picture when the maids were not looking at the cafe otherwise if they saw me taking pictures, they would have approached me to stop me, lol. 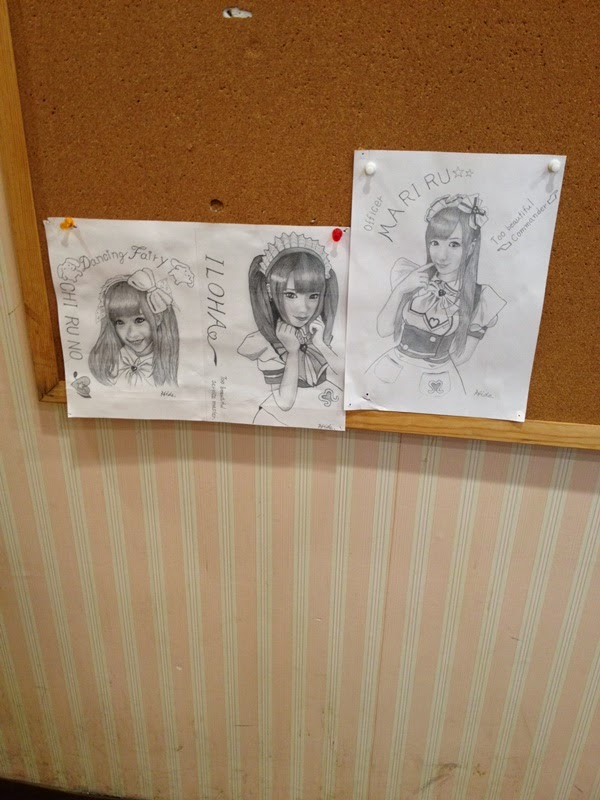 Some maid art drawings that customers left behind that I sneakily took a picture of as well. XD 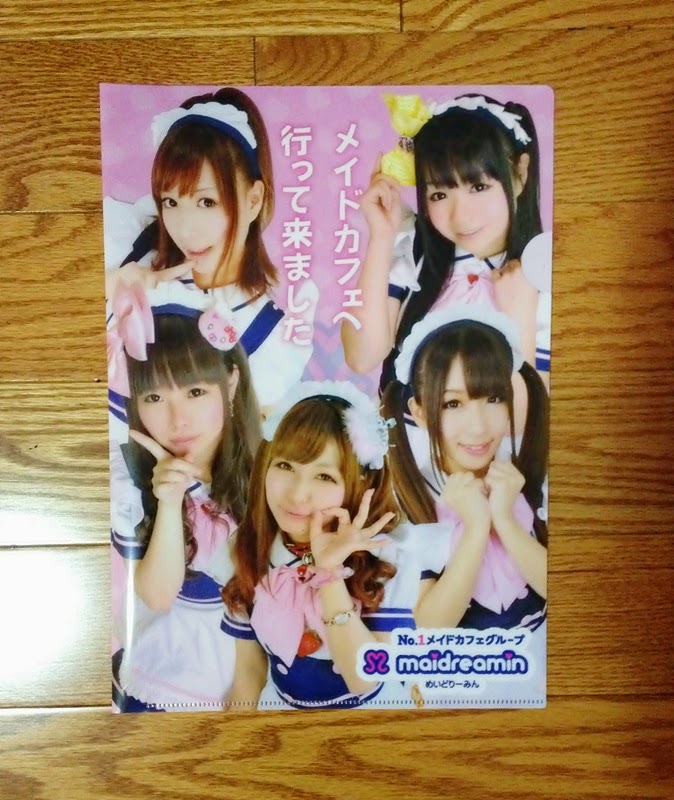 The clear file folder that I won with cute maids on it, lol. 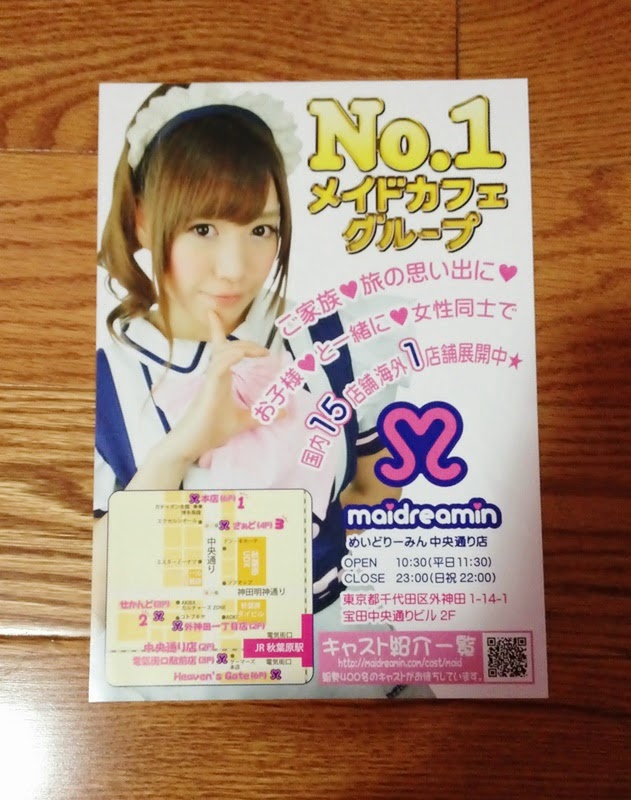 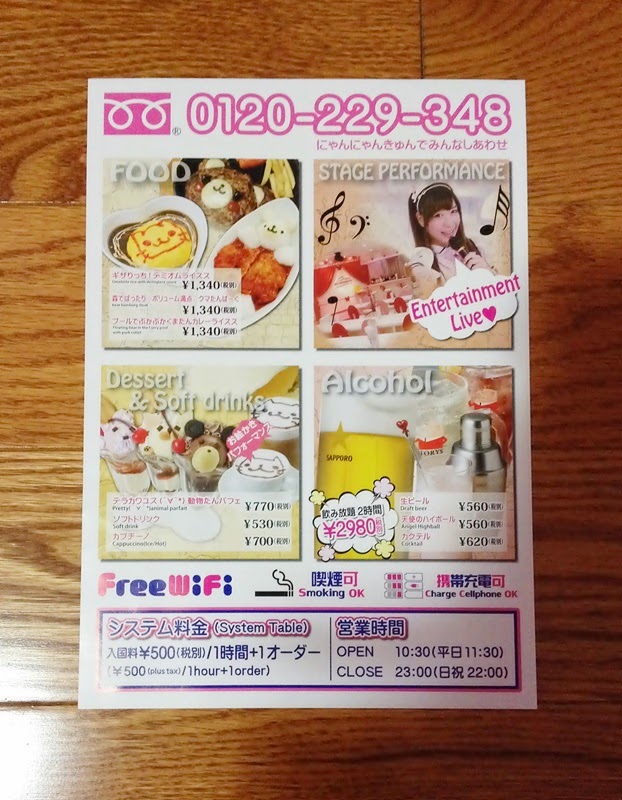 The flyer I got from the maid who was handing it out to customers outside of the cafe. Yes, I kept the flyer. I keep everything I received while I was in Japan and took them home with me to Canada, lol. =P

Overall my first maid cafe experience in Japan was pretty interesting and fun. They do charge a seating fee of 500 yen per hour because you are basically paying to be treated like a king/queen. The food price is relatively more expensive too than other normal cafes you may encounter in Japan because they are providing you with a special service like as if you are an owner of a maid. So it's kind of like you are hiring someone to be your own personal maid for the day or for the number of hours you plan to stay at the cafe. I'd totally work as a maid if I was living in Japan! XD So easy to make money, lol.

I spent about $30 in CAD at the cafe and I was there alone. It was quite expensive but definitely worth it for the experience of once in a lifetime kind of thing where you would not be able to experience it anywhere else but other than in Japan. So I would suggest you to try it if you want to know what it feels like to be in a maid cafe. It's really more of the atmosphere rather than eating cute and yummy looking food and plus being served by cute maids. What guy would not love that, right? lol. But it's not only guys that would visit maid cafes, it is very common for girls to visit maid cafes too in Japan.

In fact during my time when I was there, most of the customers at the cafe were actually girls. There was also only one maid at the cafe that speaks English and the rest of them didn't really speak English that well so they didn't interact or talk to me as much because they knew I was an English speaking guest and was probably too shy to approach me. However, I did enjoy the service provided by the one maid who speaks English. She asked me where I was from and I told her I'm from Canada and she immediately replied back with...Canada, Vancouver? And I said no, I'm not from Vancouver, I'm from Toronto! She repeated after me and said Toronto? with a confused look on her face. I asked her if she knew where Toronto is and she said no. I told her Toronto is really close to New York, like about less than 2 hour plane ride there and she said sugoii (that's sooo amazing!) XD She also asked me if it is cold in Toronto and I said yes, it can get very cold in the winter. She asked if I can speak Japanese too and I said I know how to speak a little bit of Japanese and she was like, oh that's sooo cool! She also called me a "princess" in English the whole time I was there which is what they would call their female customers in Japanese (hime-sama) and asked me to say "nyan-nyan" (the imitation of a cat voice in Japanese) with a cat hand gesture like as if I'm a cat when I need to get her attention and ask for help, LOL! It was kind of funny but cute in a way. XD

If you would like to know more information about the cafe I went to and how to get there, you can visit their official website.

I also took some random street snaps in Akihabara as well. 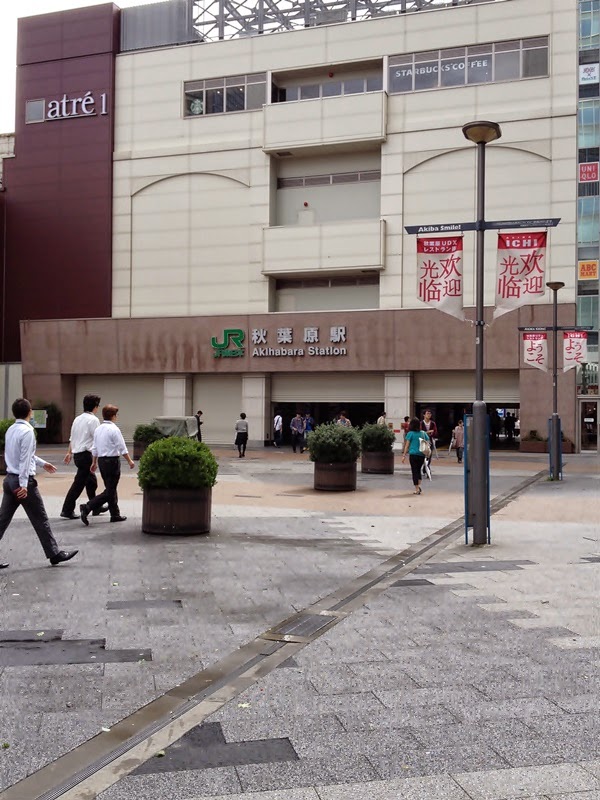 View of Akihabara station from the electric town exit. 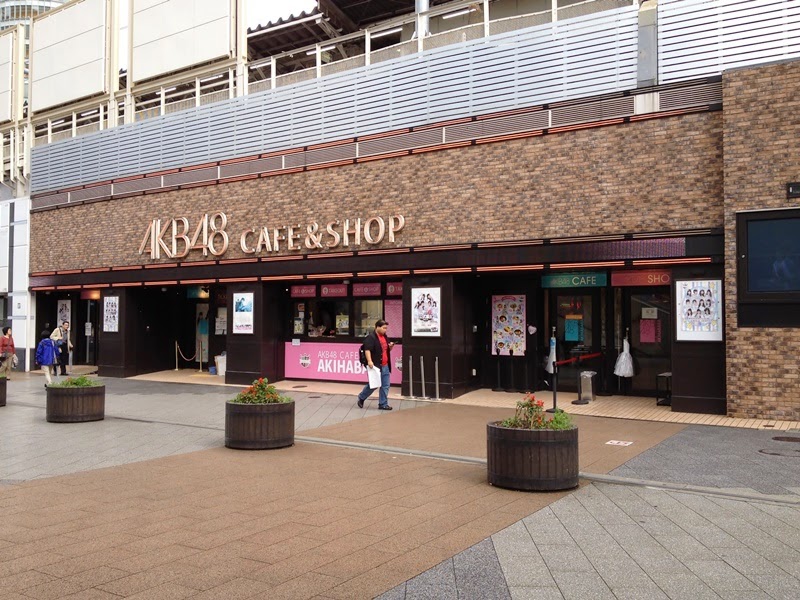 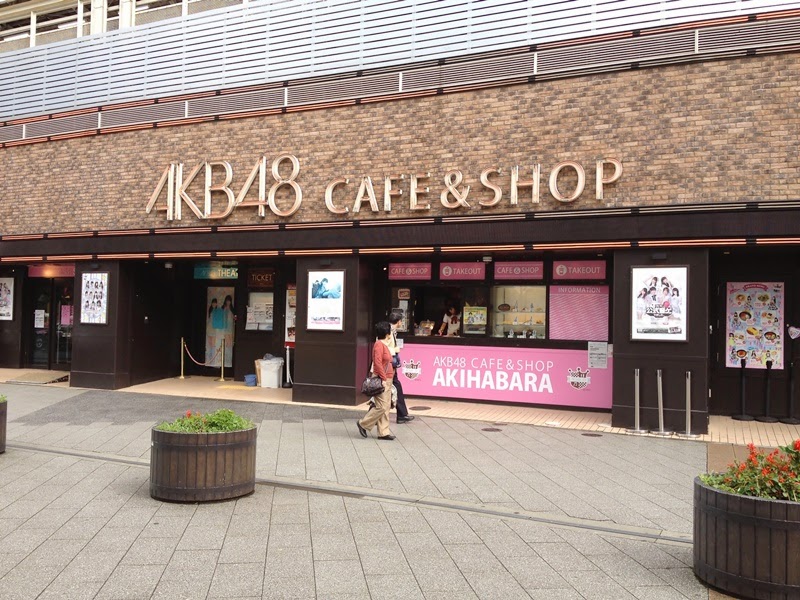 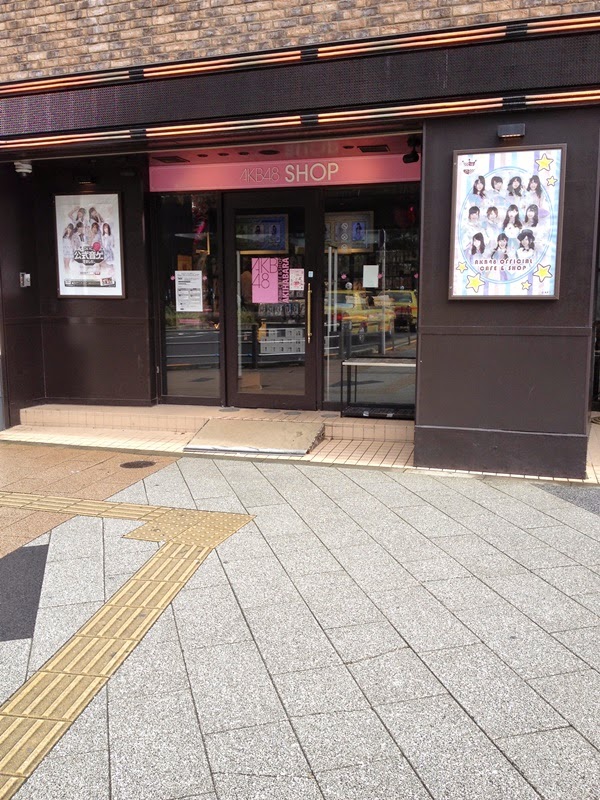 Right when you exit from the electric town exit, you'd immediately notice the AKB48 shop and cafe toward the right side of the street. AKB48 is a super famous and popular girls group in Japan. They are actually the most popular Japanese girls group in Japan with 48 members in the group split into 3 different teams. Team A, Team B, and Team K which is why they are named AKB48. There is also a show theatre right above the Don Qujiote department store on the 8th floor in Akihabara where the girls from the group do performances and dance and sing. You would often see otakus line up in front of the shop and cafe outside waiting to get inside. 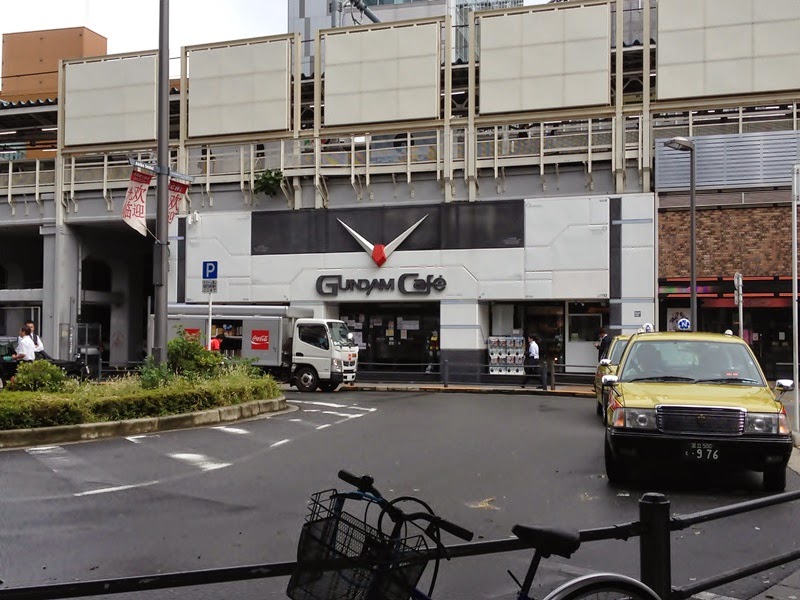 And right behind the AKB48 shop is the Gundam Cafe. This would be dream heaven for any Gundam fans. 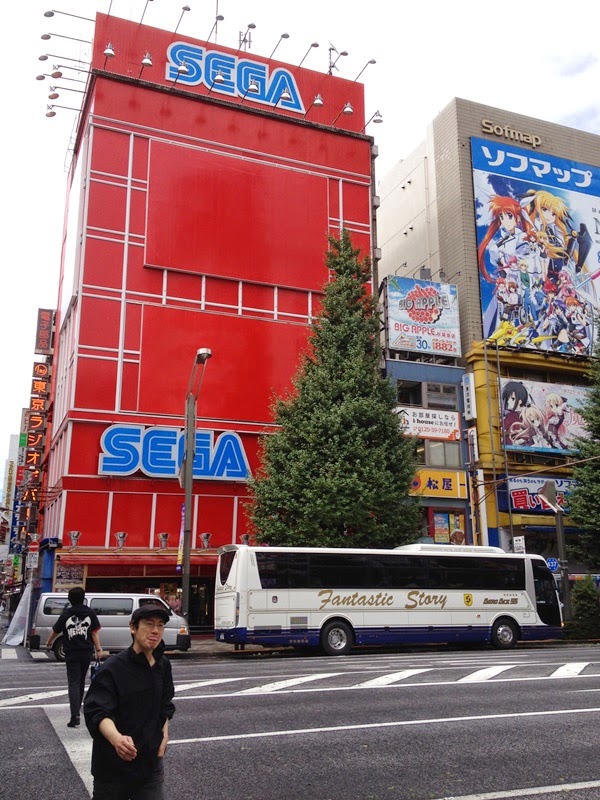 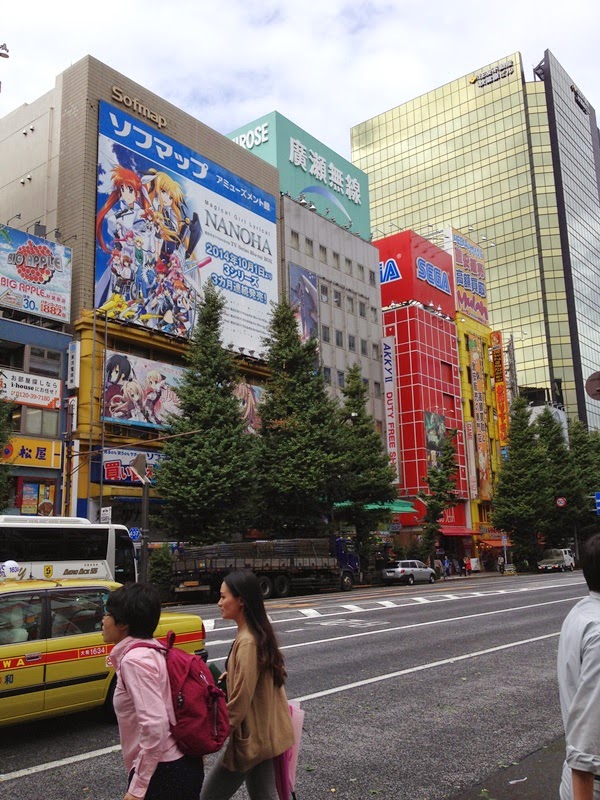 SEGA games club and everything anime related! Akihabara is actually a very interesting place to visit if you love anime, games and electronics. In Akihabara, you can find almost anything including old school classic games such as pacman, old and almost extinct rare nintendo games systems and anything you can think of from the 80's and even 70's and 60's can be found here. I wish I had stayed and explored Akihabara more but I had to leave to go shop in Shibuya in which I will do another separate post on later. On my next trip to Tokyo, I will definitely come back to Akihabara again to indulge myself in the world of anime and games! Just thinking about it makes me feel so excited and want to go back already! XD
Posted by sweet_honeydew at 3:46 PM