Harajuku! Another place I went to the most other than Shibuya. I think I went to Harajuku about 3-4 times. Like Shibuya, this is another popular tourist spot with many tourists and it can get super crowded on a weekend. 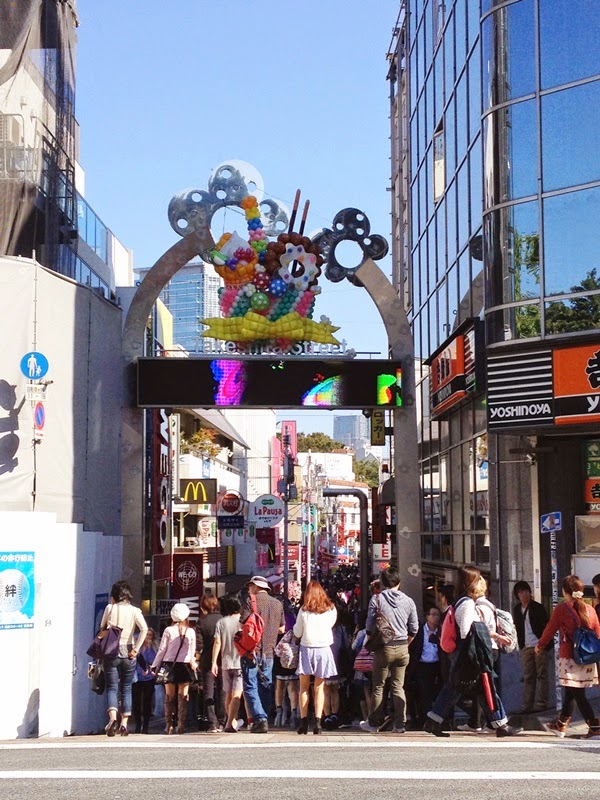 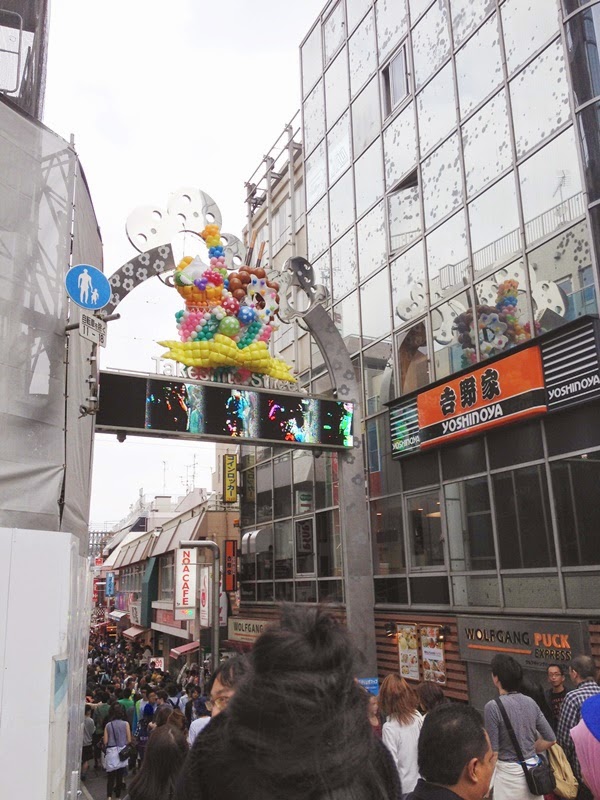 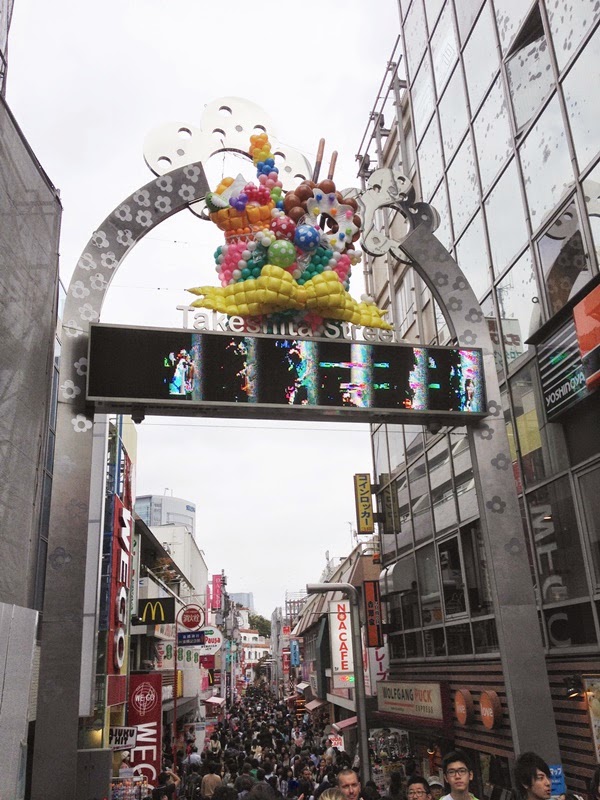 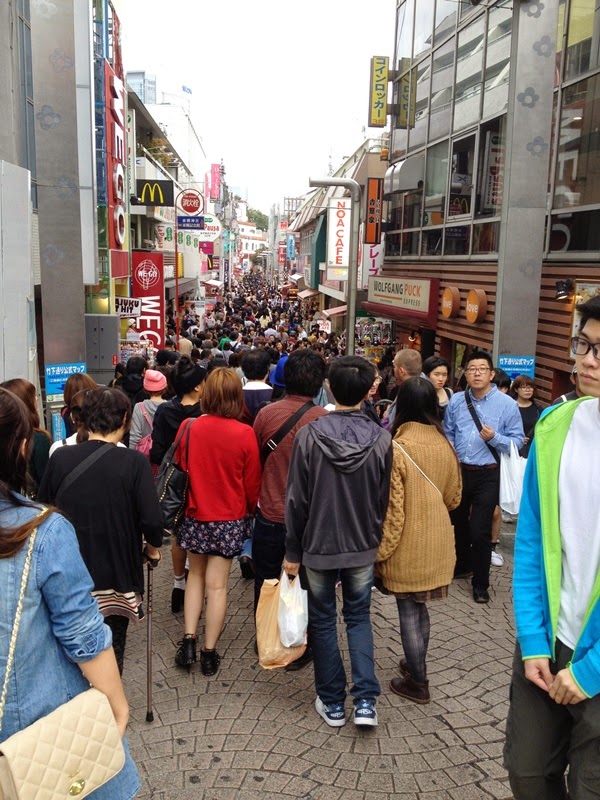 Just look at the insane amount of people walking down the street! And this was on a weekend. Takeshita-Dori street actually reminds me of a place in Hong Kong called "Mong Kok" 旺角 with a lot of shops lined up all in one street. They say you can find a lot of cheap stuff here but I don't know how true that is as I still find some of the stuff they sell here to be rather quite expensive. Maybe just cheaper than other places in Tokyo, lol. I don't really quite like the "Harajuku" fashion they sell here as it is more of the over dramatic side for me. Bright rainbow colours and unicorns? I think I'm getting too old for that! XD I went to Takeshita-Dori street mainly to shop at the Daiso (major dollar store) and eat fries at the Calbee+ store and take purikura pictures. I'll talk more about my experience with purikura photo booths in another separate poster later. 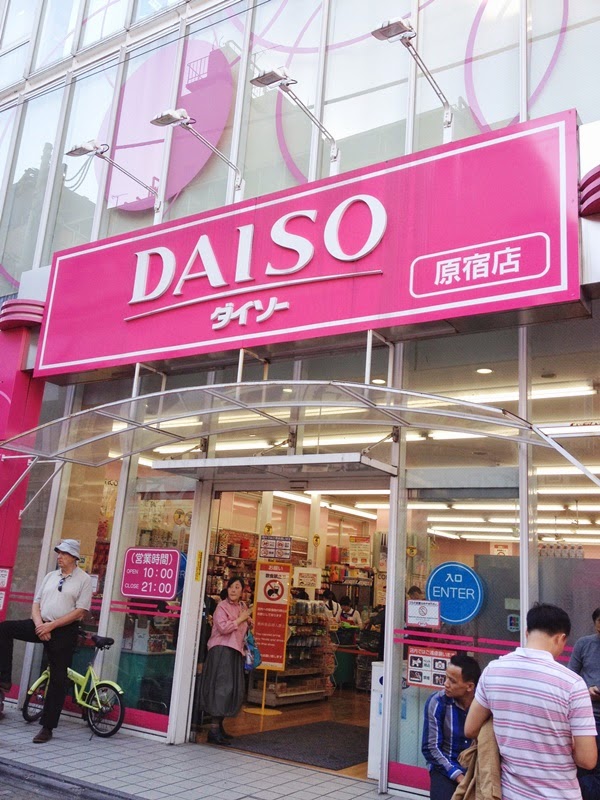 DAISO! I spent about $50 here buying random things from like bento boxes and decorations, food, supplies and household goods. Everything is soooooo cute and cheap here, omg! There is 4 floors and I could literally spend a whole day here and could possibly shop here everyday too! XD Taking pictures and recording videos inside was not allowed so I don't have pictures to show you what it looks like inside. But I can tell you they have just about anything you would want to buy from candies, makeup, food, furniture, Japanese goods and the list is endless. You can just find about anything and everything here, even things you would not expect to find at a dollar store. 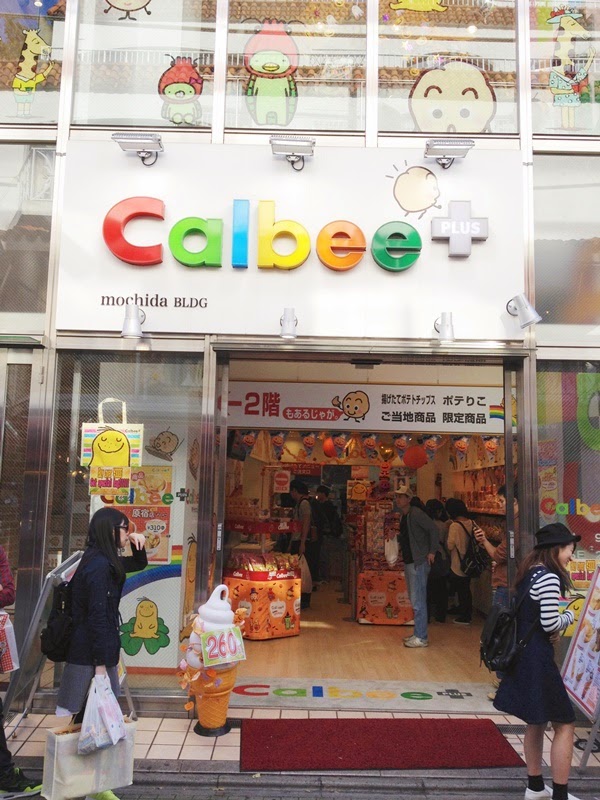 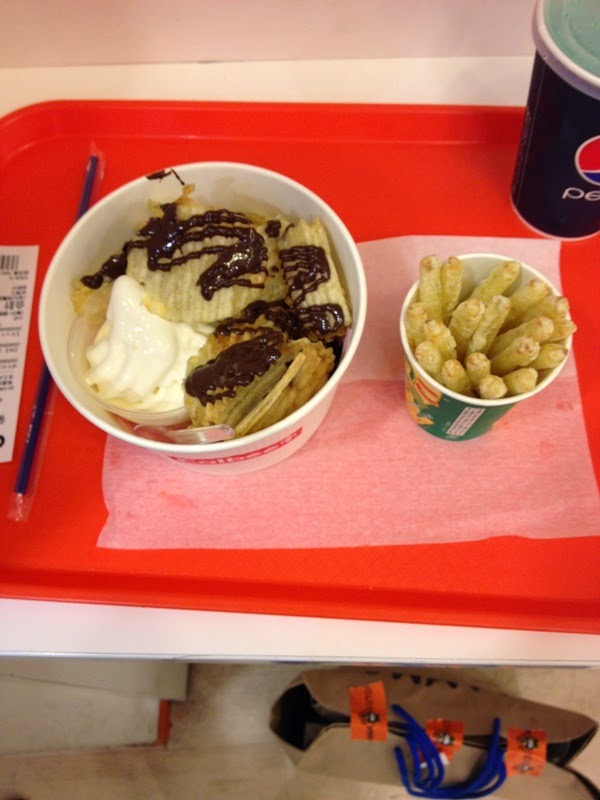 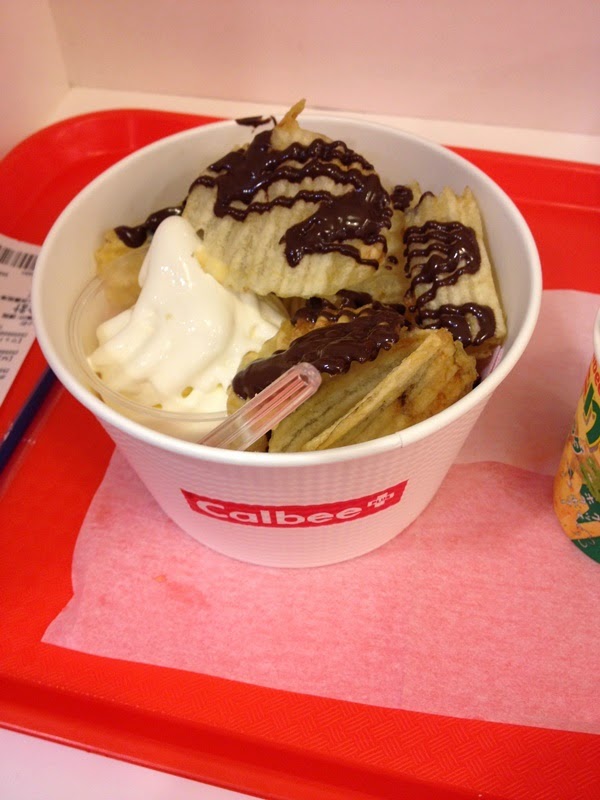 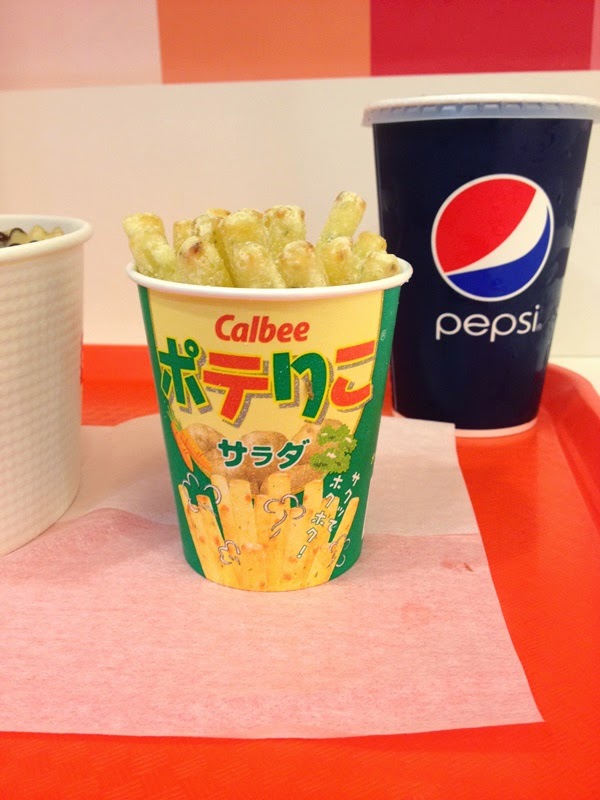 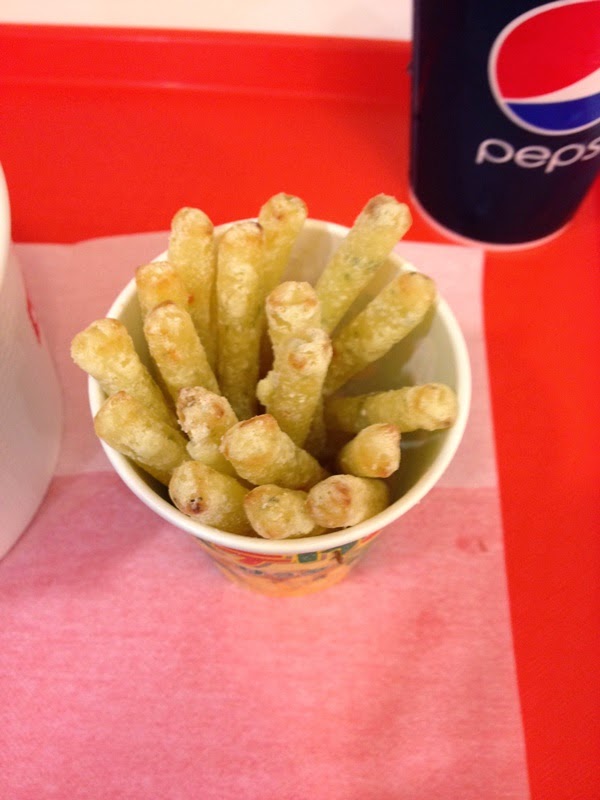 The Calbee+ store where I had the most amazing fries with chips and ice cream! My only complaint about the Calbee+ store in this location is there is no seats for you to sit and eat. They have tables but no chairs for you sit down and eat your food which I found extremely weird. I was sooooo tired after a long day of walking and the only thing I want to do is to just sit down and rest my legs with some yummy food. o(╥﹏╥)o 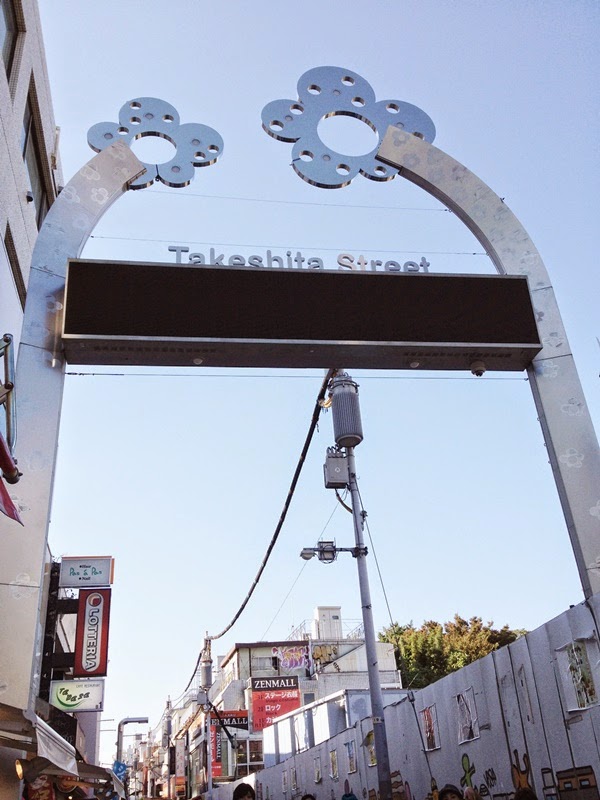 The end of the Takeshita-Dori Street. 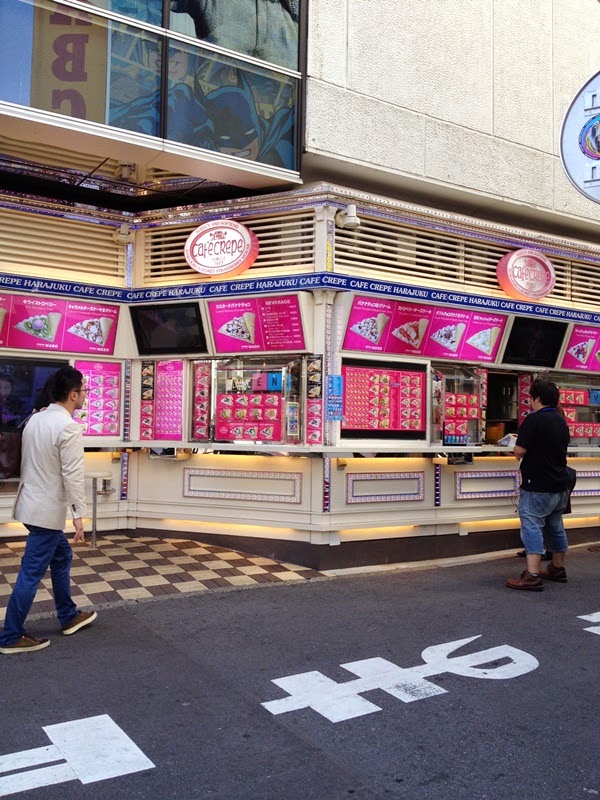 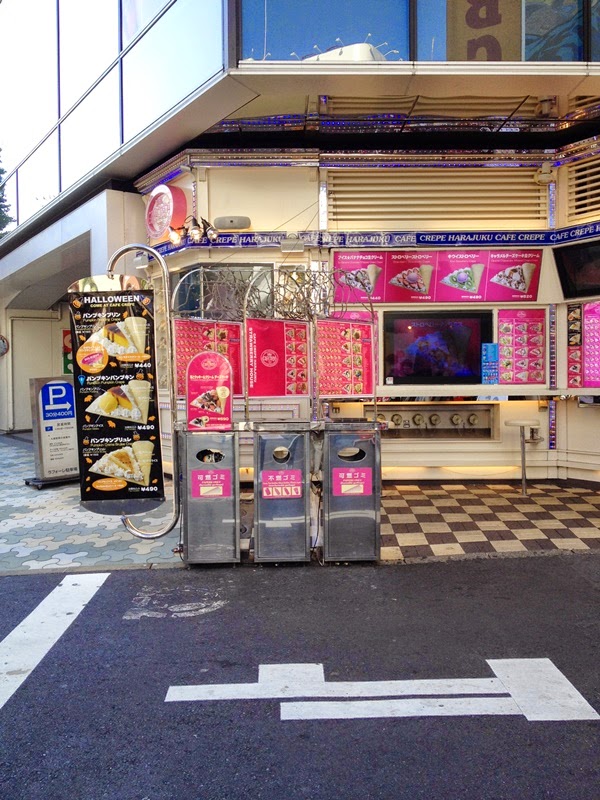 Found this crepes store at corner of the end of the Takeshita-Dori Street. Didn't get to try it, perhaps next time!

Now to the other side/area of Harajuku on Omotesando street. 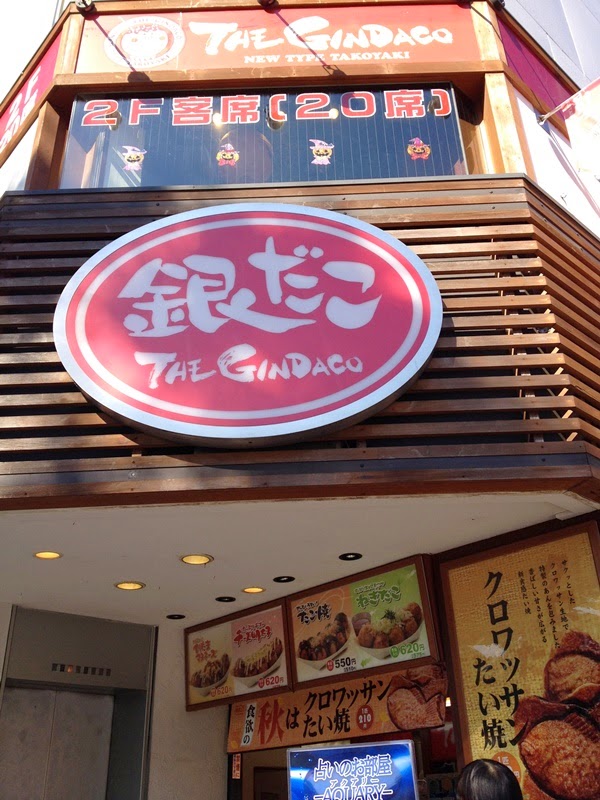 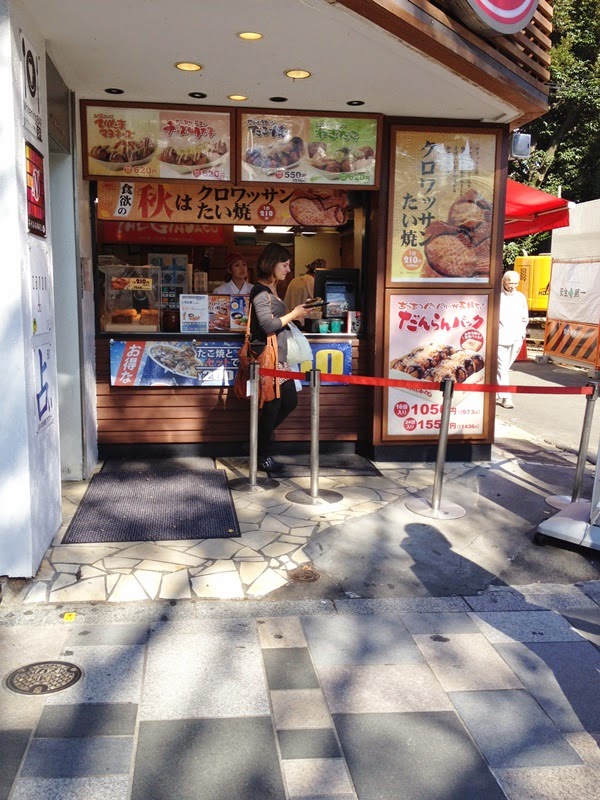 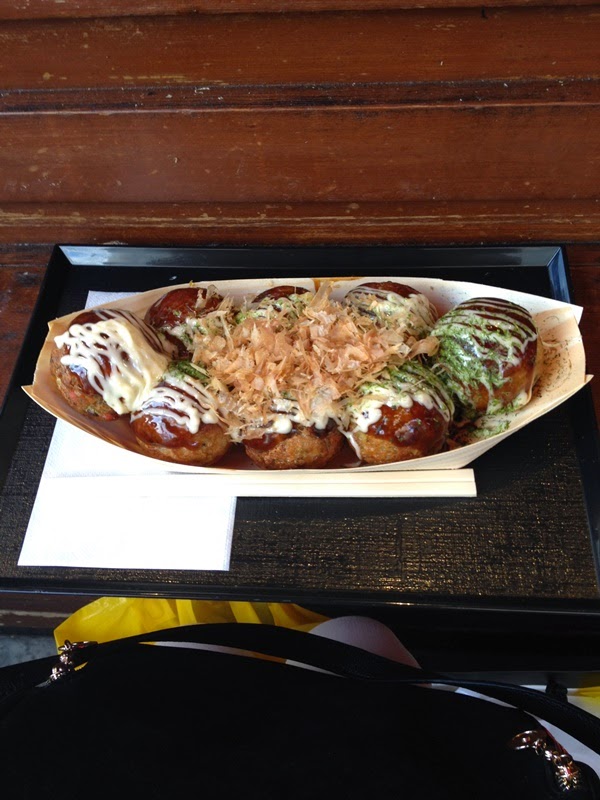 I stopped by to the famous The Gindaco shop to eat their takoyaki which is located at the very front corner of Omotesando street. It was the best takokyaki that I had! 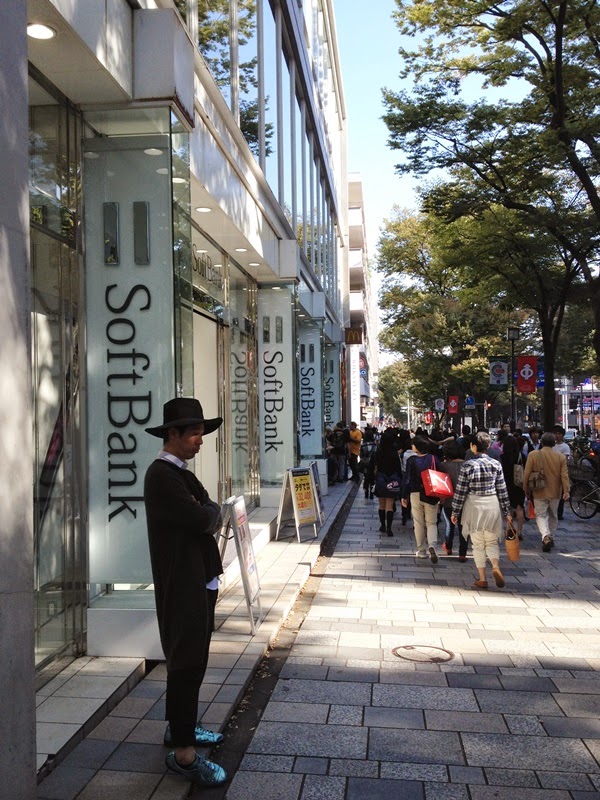 SoftBank! A popular cellphone company store in Japan. I like how that guy is just standing in front of the store so casually with those super shiny shoes he has on, lol. 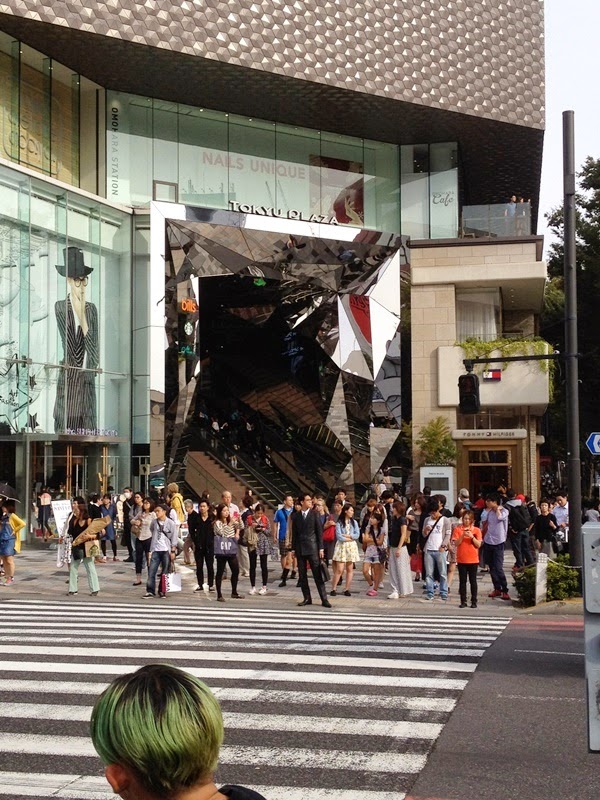 Tokyu Plaza! Didn't get a chance to go in there but I just like how all the people are randomly posing like a model while waiting for the lights to cross the street, especially that guy in the black suit! LOL. 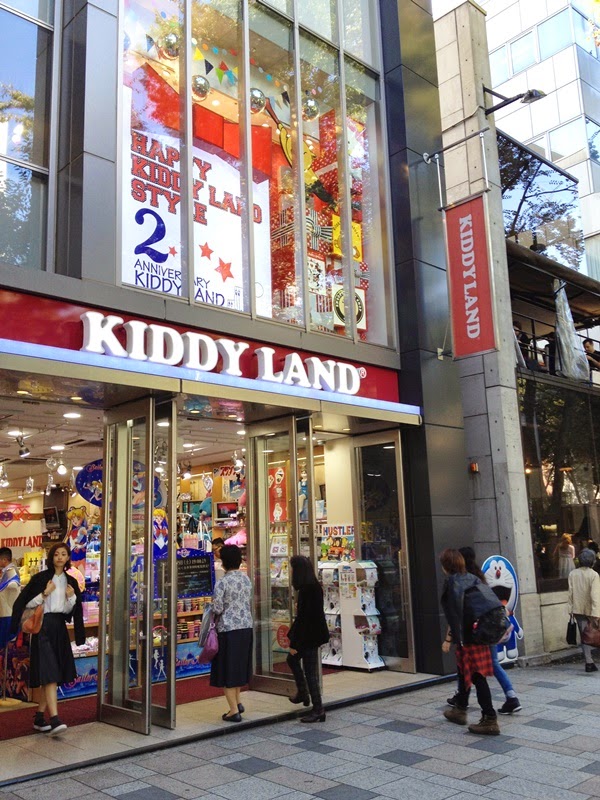 KIDDLYAND! I went to the store 4 times. It is a toy heaven for every kid and even grown adult! Will do another separate post on the store as I took a lot of pictures inside there. XD 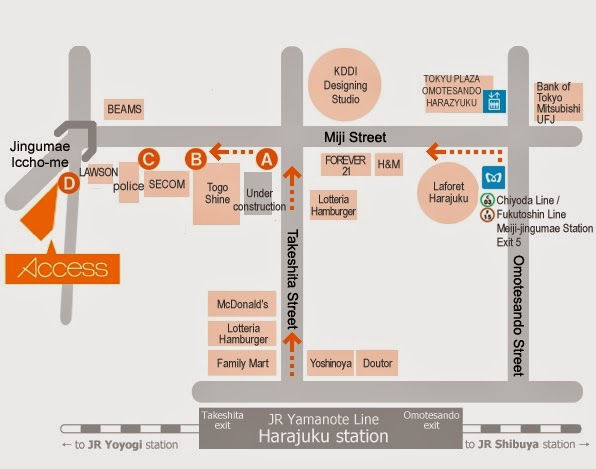 Here's a map of the Harajuku area which is actually very easy to navigate around. I was even able to find short cuts to get to the places I want to go to after walking around the area once.

Funny story/experience: I got scouted by a fashion photographer again in Harajuku. I don't know what is with me and fashion photographers in Tokyo, it's like they're stalking me, lol. I went to Harajuku to the Kiddyland store to buy something and on that day I was wearing my totoro tattoo tights as I was at the Ghibli museum earlier. I was walking on the street of Omotesando when a Japanese guy with a DLSR camera said my totoro tattoo tights were very "kawaii" and wanted to take a picture of me in them. I politely said no to him because it was already evening at that time and plus it was raining really hard! I was holding a hand full of bags and an umbrella and I was just NOT in a good condition for a picture, lol. Perhaps if it wasn't dark at night and it wasn't raining and I wasn't not holding an umbrella then I may have agreed to have my picture taken. But then again, I don't even know what he will be doing with my picture or where it may even end up. XD
Posted by sweet_honeydew at 3:29 PM